A downloadable game for Windows

NOTE: This game is for players at or over the age of 18 only!

Get more info on upcoming small games that we're making at:
http://www.patreon.com/hentaiwriter

Or, check out a large platformer/story-based hybrid game we're working on at:
http://www.patreon.com/futurefragments

- To advance text, click on the text boxes or press the Spacebar.

- To blow the spinning objects up, click on those, and then the correct spell to pick will be revealed in the upper right; before she finishes casting her spell, you'll need to click on the appropriate hand to win the round.
-------------------------
So let's get to the game's premise;

You're a college student, going to his first day at what seems to be… magician school?! Normally, this wouldn't be a problem, except for one thing… you have no idea what the hell you're even doing here, let alone you've forgotten how to use magic.

Well, no problem, you can just remember it over time, right? …except that your teacher, believe or not, is challenging you to a magical battle right here, right now.

Obviously, anyone sane would reject this. However… she says that if you win, you'll get something special. Now, thinking to yourself, what the heck could be so special that you'd risk getting humiliated in a magical battle–
Oh. She wants to make it a strip battle, and if you win… you get to have your way with her?!  Yeah, this has turned into one of the craziest first days at school, by a long shot.
-------------------------
And now, some of the game's features;

Feel free to ask anything in the comments, or to send us an email with any questions as well! If you did enjoy the game, please leave a comment about it below, too! :)

In order to download this game you must purchase it at or above the minimum price of $5 USD. You will get access to the following files:

It's a damn shame the concept didn't continue after this game. I understand that the simplicity of it probably turned motivation to properly finish this off, as well as other contributing factors.

This game takes a stripping & reward concept to a satisfying degree & because of the voice acting it makes the scenes feel alive as opposed to animating them.

I would like to see a special edition of this one day, at least. Maybe with a new pose if you can get ahold of the same artist. But more importantly, would love to see a better gallery mode without having to skip through a bunch of text, and then accidentally going too far and having to restart it for the scene I wanted. With an option to mute/unmute voice acting.

Also, not sure what broke but as of like 2 years ago it throws me an error that it can't create the process. Doesn't give any specifics, any ideas on a fix?

What operating system are you on? And can you send me a screencap of where it says that error and what the error box says? If you don't want to post it here, you can send it to hentaiwriter@gmail.com or PM me it on Discord at https://discord.gg/puXrfSm

As far as the game itself though, yeah, we probably wouldn't ever update this or revisit it, but I will say if you want to see more about the game, you should look up the game on F95; I wrote in the topic for it, there's a lot of interesting info in there.

Windows 10, like I said - it's extremely vague of an error. The reason is literally blank, it wasn't edited.

And that's a shame. I have read through F95 in the past, or a few years back and as I recall the game was supposed to be something much larger (I believe your artist for this game spoke about that on Tumblr) but I understand the woes of game development and things not working out in the end, even though you get most of the pieces of the puzzle together. Sometimes shit happens.

At the very least, consider a sequel one day? Even if it's short like this one. Would be cool.

Yeah, they decided they didn't wanna really work on games and wanted to focus on college, so I had to make do with what I had, so to speak.

As far as the problem goes though, are you unzipping the game to a folder and then running it from there? Additionally, do you have a virus scanner running, or are you unzipping it to a "protected" folder or drive (one that can't write/read without admin access)?

The horror aspects would come from the truth of the identities of the characters as a good number of people consider topics involving that kind of thing to be "horror" based, even if it's not inherently scary (thus the Psychological Horror tag).

As for what to type, you can put in different things, but https://f95zone.to/threads/magic-matchup-final-hentaiwriter.18324/post-1121886 this post covers all the possible answers you can give.

Love the game, but it doesn't seem like much of a psychological horror... :/

Did you play all the way through until the actual ending? :P

It's a cute lil game, but I'll be honest - it's not something I would have paid $5 if I'd known what the content was going to be.
The concept was super cute, that each time you play the game it plays out a bit differently ... but the lack of animation for the sex scenes made it not worth it.

Looking forward to your other project tho, Future Fragments looks great

Just making sure, did you play through to the end? :P

And yeah, the lack of animation isn't something we're happy about, but if you did want a refund, feel free to ask of course!

Yeah, I played it through. I did enjoy it (so no refund required). The hint of a bigger story was nice, that you remember more and more every time. [spoiler] Reminds me of The Good Place, where they're in hell but keep being given hope to keep them engaged in trying to escape. [/spoiler].

Because of that (and the promise of greater animations and story to come), I've got high hopes for your offer projects!

Well thanks a lot, that means a lot! And yeah, hey, that was an accidental similarity to The Good Place haha!

Looks like I'm ~330 days later but here's a comment for ya =D
For anyone interested, the demo seems to 'work best in Chrome' so just grab a portable version of Chromium and away you go :)

The Lack Of Comments Disturbs Me (;-;) 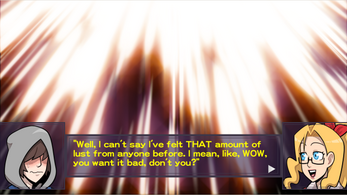 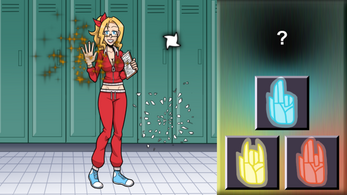